Invasive alien plant species (IAPs) pose a direct threat not only to South Africa’s biological diversity, but also to water security, the ecological functioning of natural systems and the productive use of land. Programmes such as the DEFF-NRM Working for Water project have been established to facilitate the clearing of Invasive alien plant species. This case study investigates potential beneficiation options with the aim of producing BioEnergy products.

Back To Case Studies

Invasive Alien Plant species (IAP) are plant species that are bought into an environment outside of their natural environment. They then spread uncontrollably, leading to an invasion of the habitat (IUCN, 2021). These species are non-native to an ecosystem and can negatively impact ecosystem services, threaten biodiversity, reduce surface water runoff and increase fire hazards. South Africa has more than 750 alien tree species and 161 of these species are regarded as invasive, and the greater majority of these are woody plant species (Nyoka, 2003).

The Working for Water (WfW) programme managed by the Department of Forestry, Fisheries, and the Environment is one of the national programmes which aim to create employment through the clearing of IAP. The programme started in 1995 and has cleared more than one million hectares of invasive alien plants, it has also created jobs for approximately 20 000 people (WFW programme). The woody biomass generated from clearing the IAPs can be used for different biomass beneficiation programmes. There are opportunities for this biomass to be utilised in various business industries such as the manufacturing of wood products, chipping, woodfuels, and bioenergy products such as electricity and fuels.

The province of Kwa-Zulu Natal (KZN) in South Africa is a region that has experienced significant increases in biological invasions. During the course of the programme, Working for Water has cleared 70380 ha of land in KZN alone. The majority of the woody alien species occur in the following districts: Umgungundlovu, Uthukela, Zululand, and Uthungulu. The province has a high unemployment rate which was  26.9 percent in the third quarter of 2020 (StatsSA,2020). The statistics also showed that in 2019 approximately 38 percent of the KZN population was still living below the Food Poverty Line(StatsSA,2020). The province is in an advantageous position to use the woody IAPs biomass to produce biofuels such as jet fuel. This will create new job opportunities and support socio-economic development for KZN.

This case study is a retrospective study investigating the potential for utilising biomass derived from IAPs for beneficiation within KZN. It presents an analysis of available biomass feedstock from IAPs in KZN and further discusses the feasible technology options which can be utilised to convert woody biomass into Biojet fuel. The techno-economic feasibility analysis for this case study comprised of determining optimal locations in Kwa-Zulu Natal province to place bioenergy production facilities. A range of different process technologies were assessed, with outputs varying from Jet fuel to Biomass Pellets and wood chips. The allocation of the facility is based on the distribution and volumes of available feedstock.

Forest Management Certification provides the public reassurance that timber products coming from a forest and IAPs are managed in a responsible and sustainable way.Many international markets require that forest products such as timber and IAPs biomass to be sustainably sourced. Biomass suppliers are required to have their products audited and certified as sustainably harvested. Sustainability programs such as the Forest Stewardship Council (FSC) offer such certification of products.
Click Here

Thermochemical methods used to convert biomass into Biojet includes the production of bio-oil, synthesis gas, and char in different ratios. The methods used to generate bio-jet are gasification and pyrolysis, and hydrothermal liquefaction (HTL). The Fischer-Tropsch process uses gasification together with synthesis to generate bio-jet(IRENA, 2017). The gasification process is made up of the following steps to produce jet fuel. The first step is to produce synthetic gas by heating small feedstock particles at high temperatures. The synthetic gas is made up of mainly H2 and syngas. The Fischer-Tropsch process using catalysts is then used on the syngas to change it into different gases and fuels(IRENA, 2017). Gasification and Fischer-Tropsch process have been used since the 1980s by South Africa’s Sasol company to convert coal into fuels (http://www.energy.gov.za/files/esources/petroleum/petroleum_sasol.html).

The fermentation process converts syngas into liquid biofuels. Lignocellulosic biomass is used as the feedstock in this process. The small feedstock particles then get heated at high temperatures to produce syngas.  The syngas gets cooled down and then fermented to ethanol or butanol using acetogenic bacteria (IRENA, 2017). Alcohol to jet technologies are then used to convert ethanol or butanol into jet fuel.

The techno-economic feasibility analysis for this case study comprised of determining optimal locations in Kwa-Zulu Natal province to place bioenergy production facilities. A range of different process technologies were assessed, with outputs varying from Jet fuel to Biomass Pellets and wood chips. The allocation of the facility is based on the distribution and volumes of available feedstock.

The modeling process consisted of generating service regions for candidate facility locations and then ranking the locations based on the relative transport costs required for each candidate facility. Data regarding the number of facilities as well as the transport costs and distances per modelled potential facility location are presented below as cost summaries and transport distances and facility spatial information.

Comparisons of the unit cost of production for each technology and facility capacity used in this case study are presented below. A comparison between processing facility product output jet fuel, pellets, and wood chips is presented from woody IAPs feedstock. A unit cost of production is given per harvested tonne and processed tonne (left), and the corresponding cost/unit output (right) and the competitor range. All values are given in 2019 Rands. The competitor prices for jet fuel come from the Mundi Index 2021. In each figure, production costs (left) are the total costs estimated from the model and include the Capex and Opex of the conversion facility, as well as the transport costs and loading costs from feedstock locations to conversion facility (a more detailed costing of each category is given further down). Here, the production cost per processed tonne is dependant on the conversion efficiency of the processing technology (shown on the right-hand axis in the top row).  The top row provides a more detailed comparison, whilst a summary (per technology) is presented as a range below. 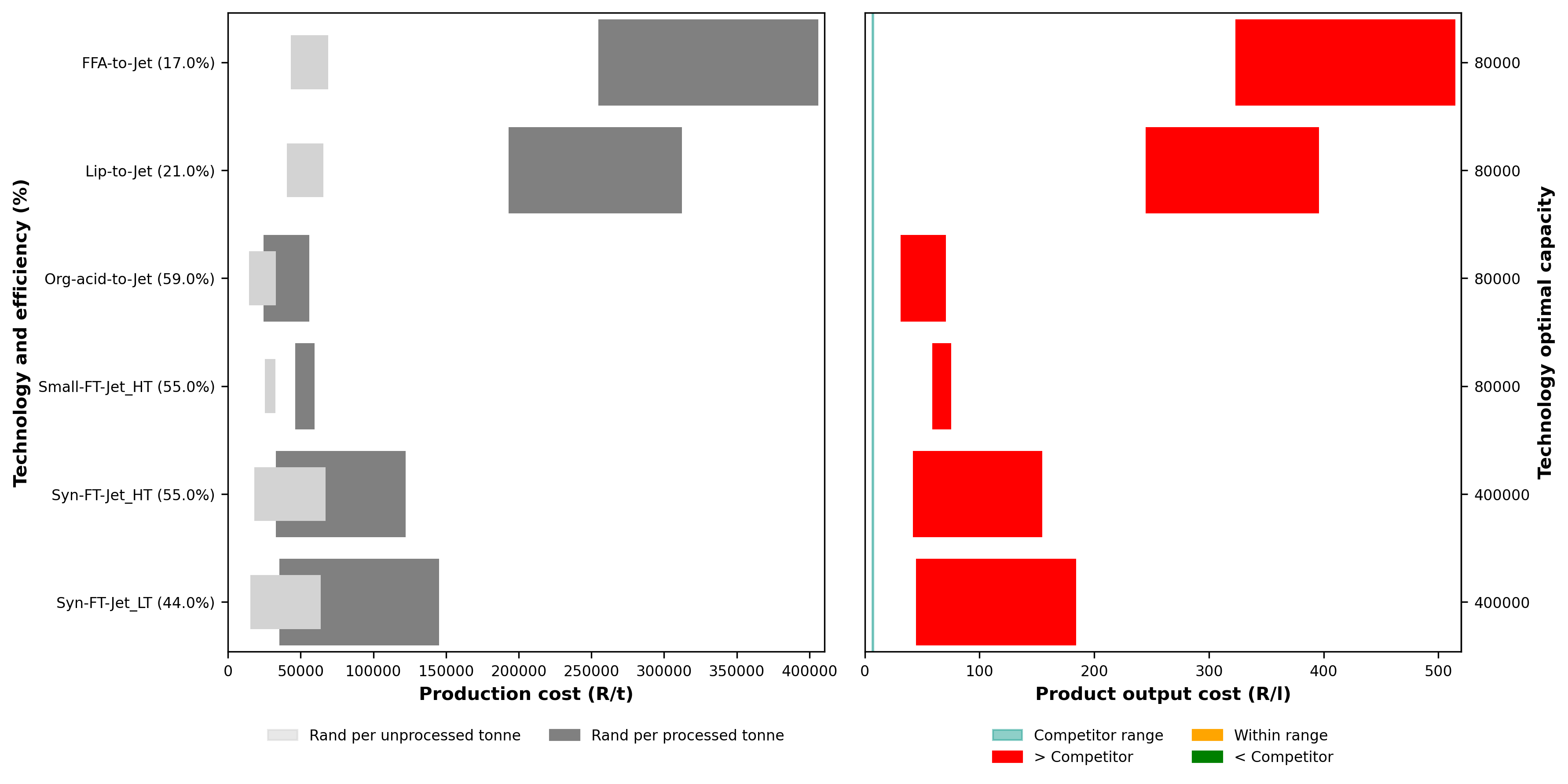 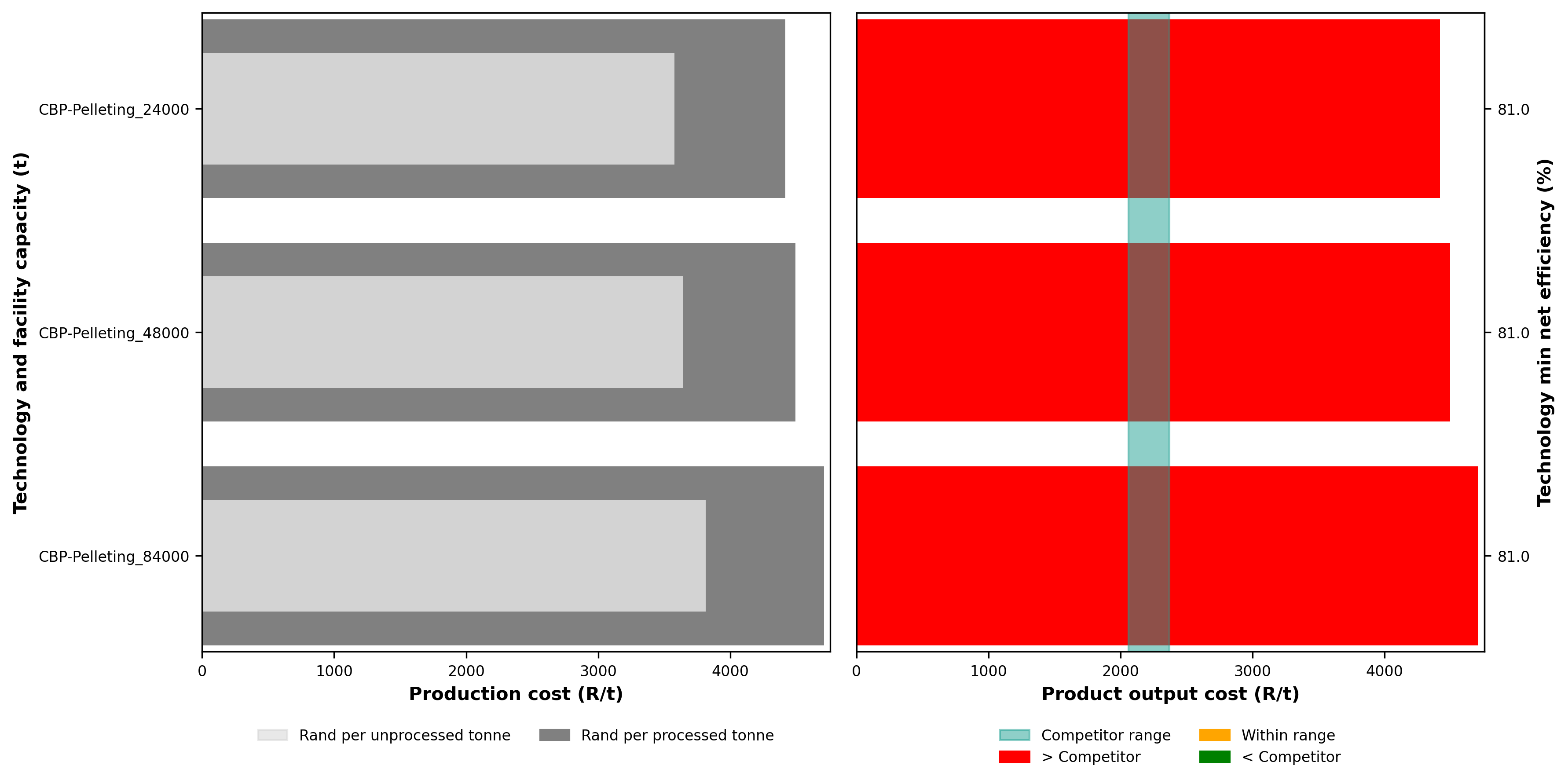 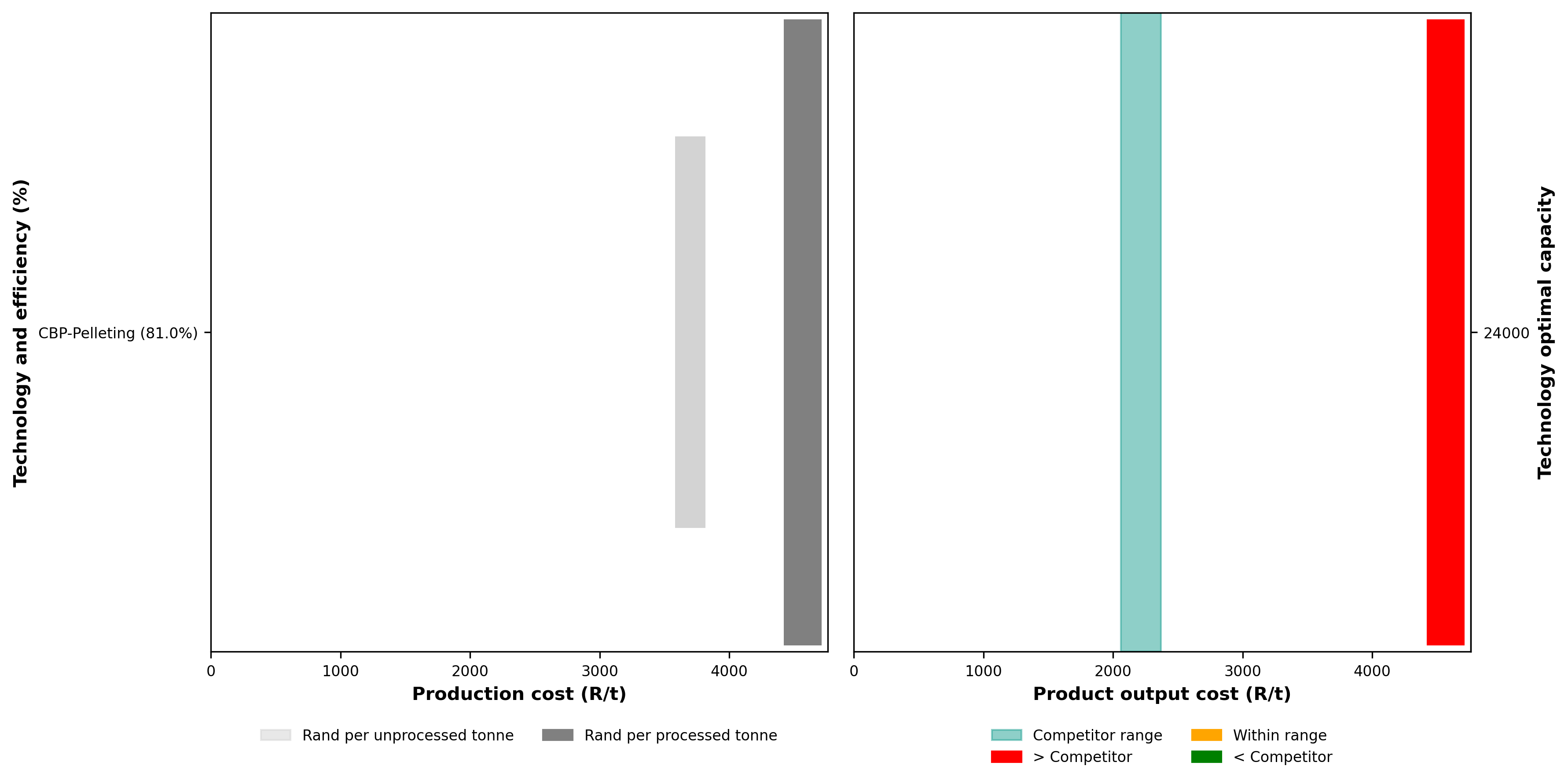 The charts below present detailed production costs for each conversion technology according to cost categories (Capex, Opex, load costs, unload costs, and transportation costs).  The charts present the costs per scenario (lifetime, average, and present value as 2019 Rands) in the top row, and per facility in the bottom row. The total Rand value is given on the right hand axis of each chart, with the cheapest production cost highlighted in bold. 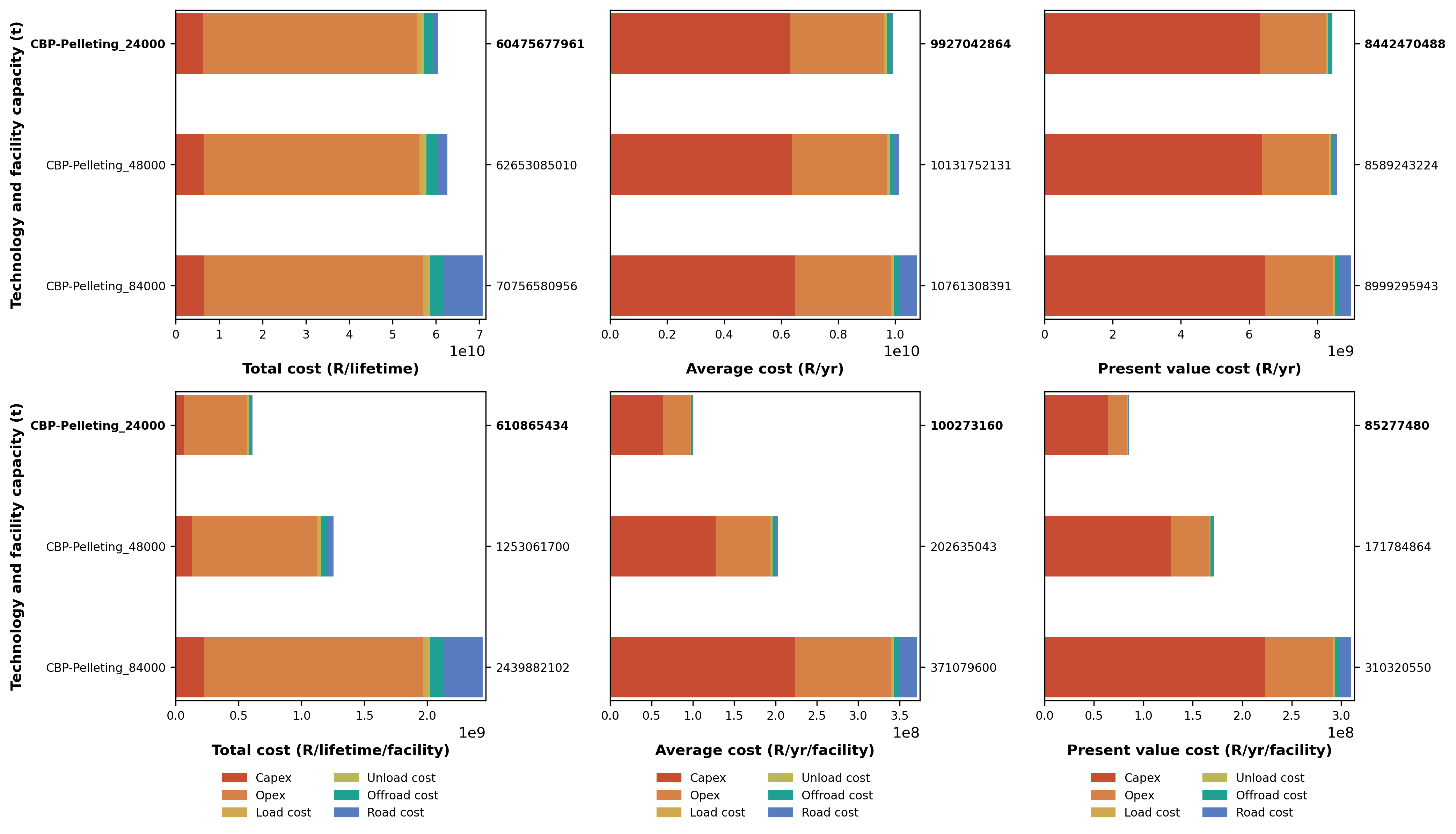 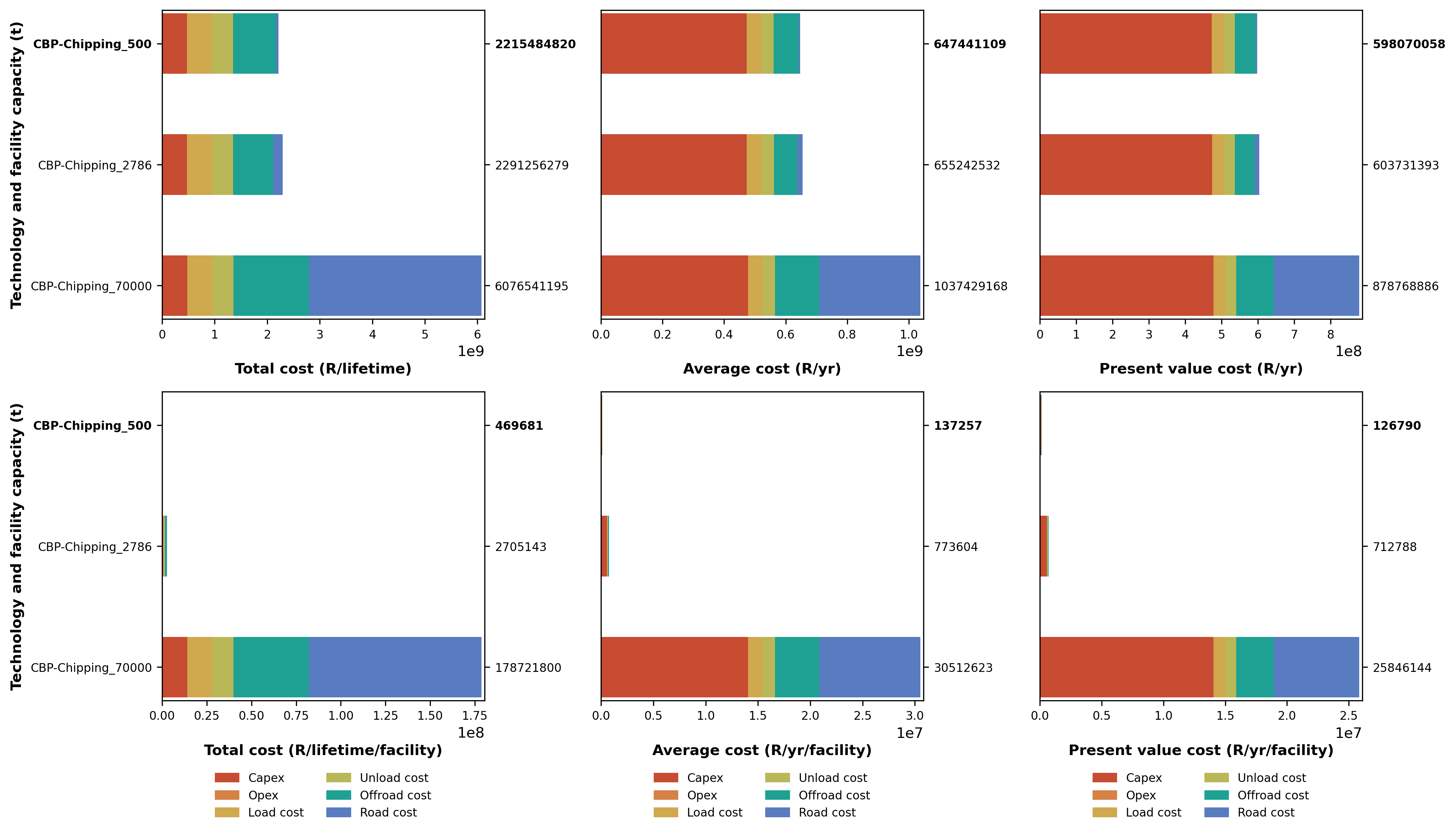 The transportation summaries below give details on the transportation requirements for each conversion technology. On the left are the ranges of distances required for each facility and transport mode (road and offroad). The mean distances per working day and per year (per vehicle) are given. In the middle chart, the total distances (for all vehicles) are summarised. Finally, the chart on the right, gives the number of vehicles and number of facilities (these values are presented on the right hand axis as well) for each conversion technology.

The figures below present a detailed summary of the transportation distances for each of the conversion technologies used in this case study for woody IAPs, along with the location and routes from each feedstock location (including their catchment area) to the conversion facilities in each technology option. The road type attributes in the bar chart (top) are according to the attribute fields in South Africa’s National Geo-spatial Information (NGI) 2019 road layer (http://www.ngi.gov.za). The distances are given per road type in km/y and summarised as the total road, total offroad, and total distances that need to be travelled.  Additional information and model assumptions are provided in the bottom image. These include the feedstock type; the total tonnes available from the feedstock per year; the conversion technology and its processing capacity; the total distance that needs to travelled; the number of road and offroad vehicles required (including assumptions about their cost per km, average travel speed, load capacity, and working days per year). The legend on the map provides further information on the number of facilities required for each scenario, the number of feedstock locations (roadside depots), and the number of catchments that supply the feedstock. 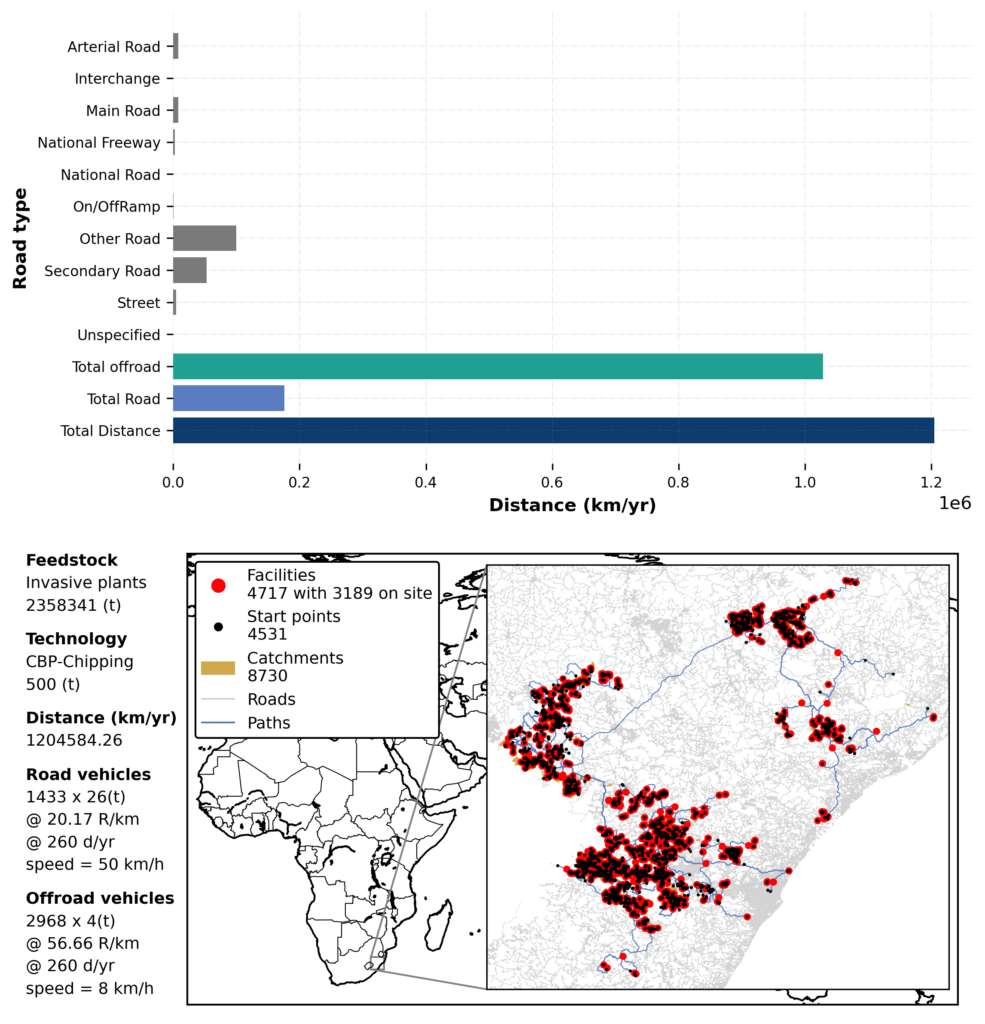 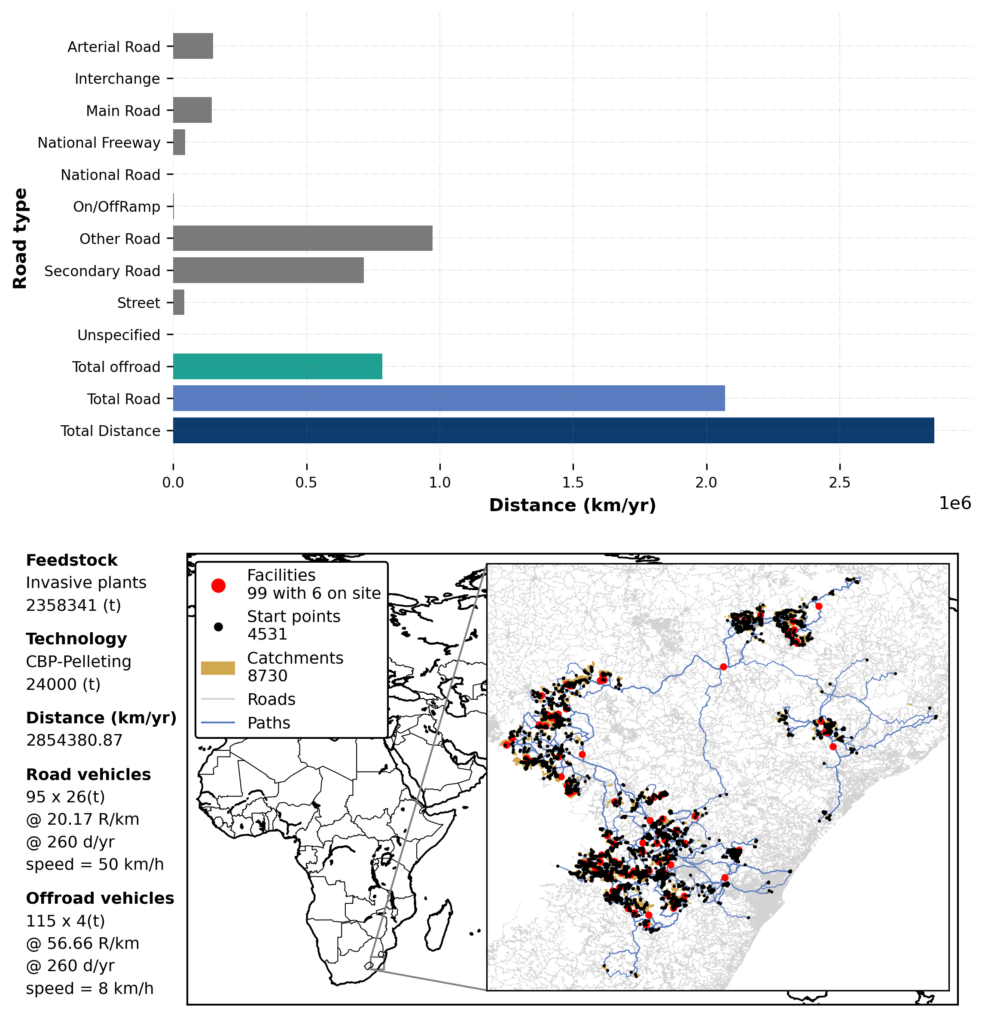 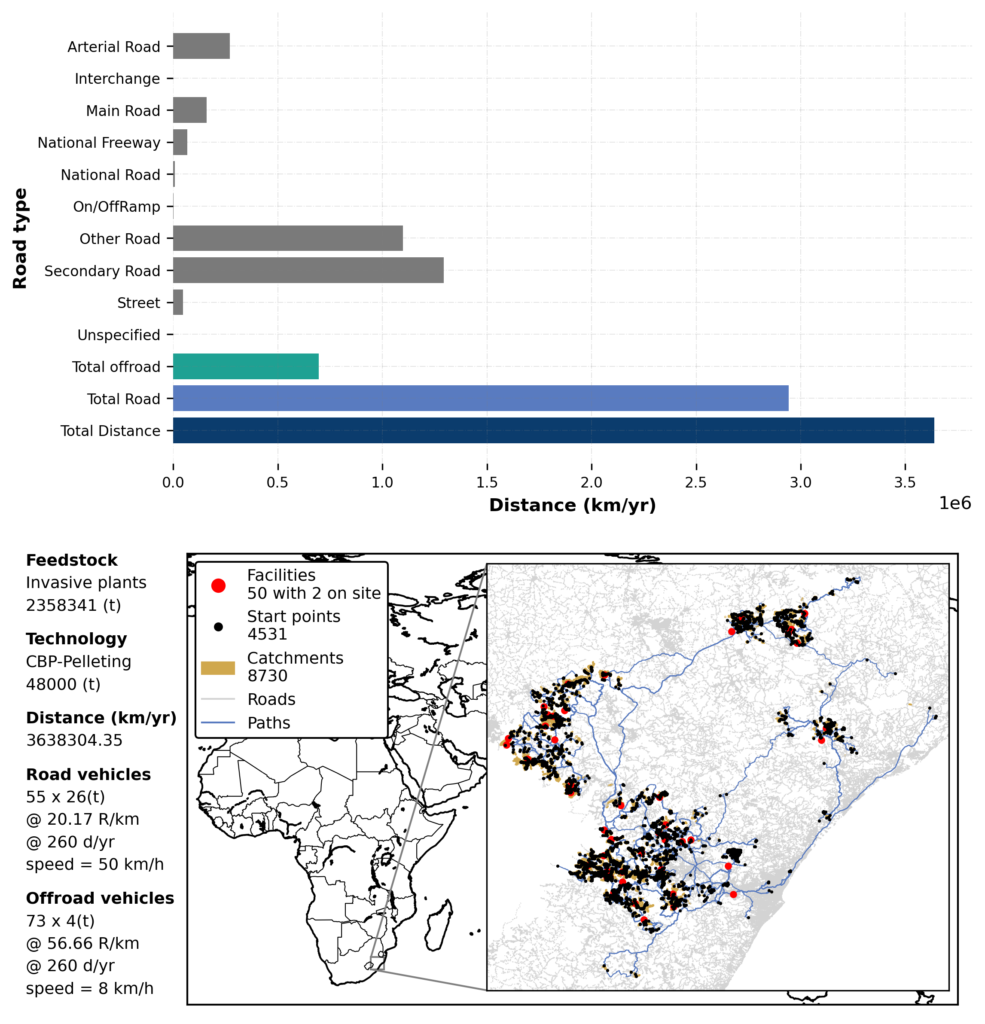 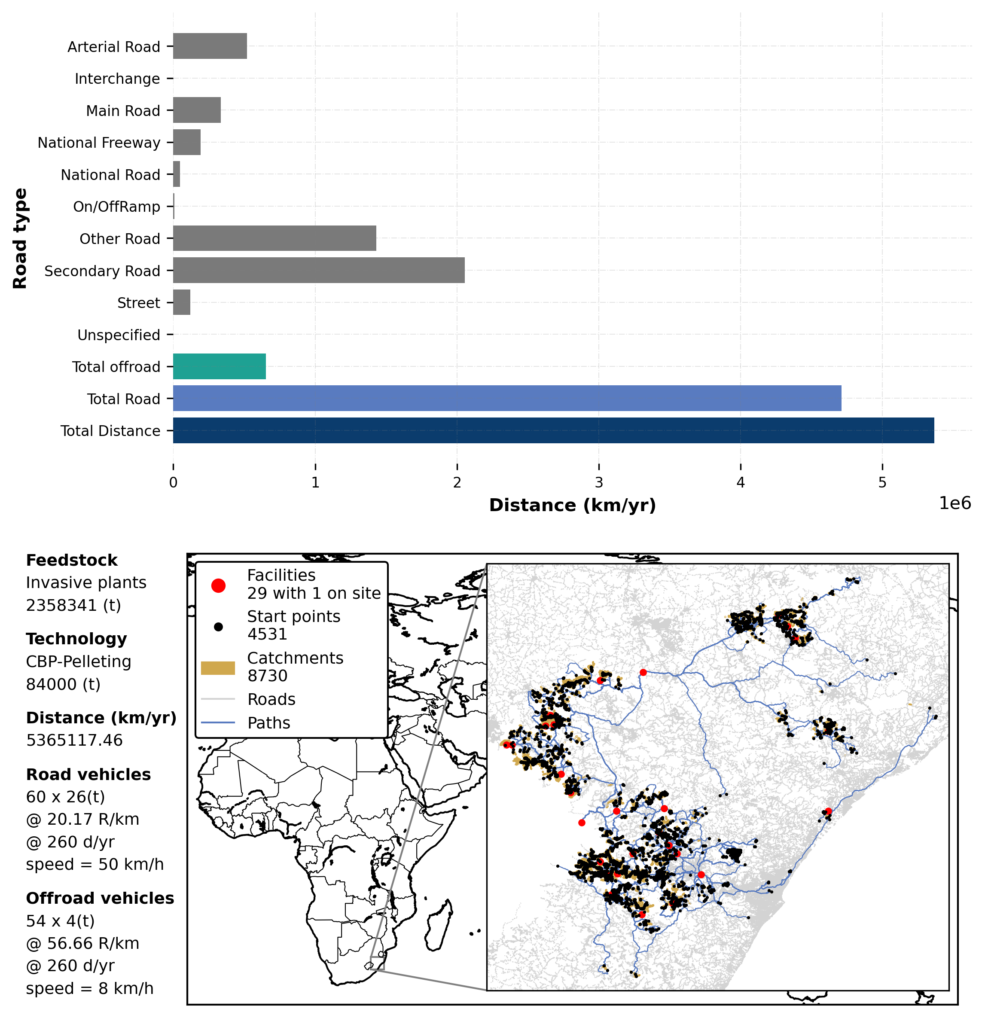 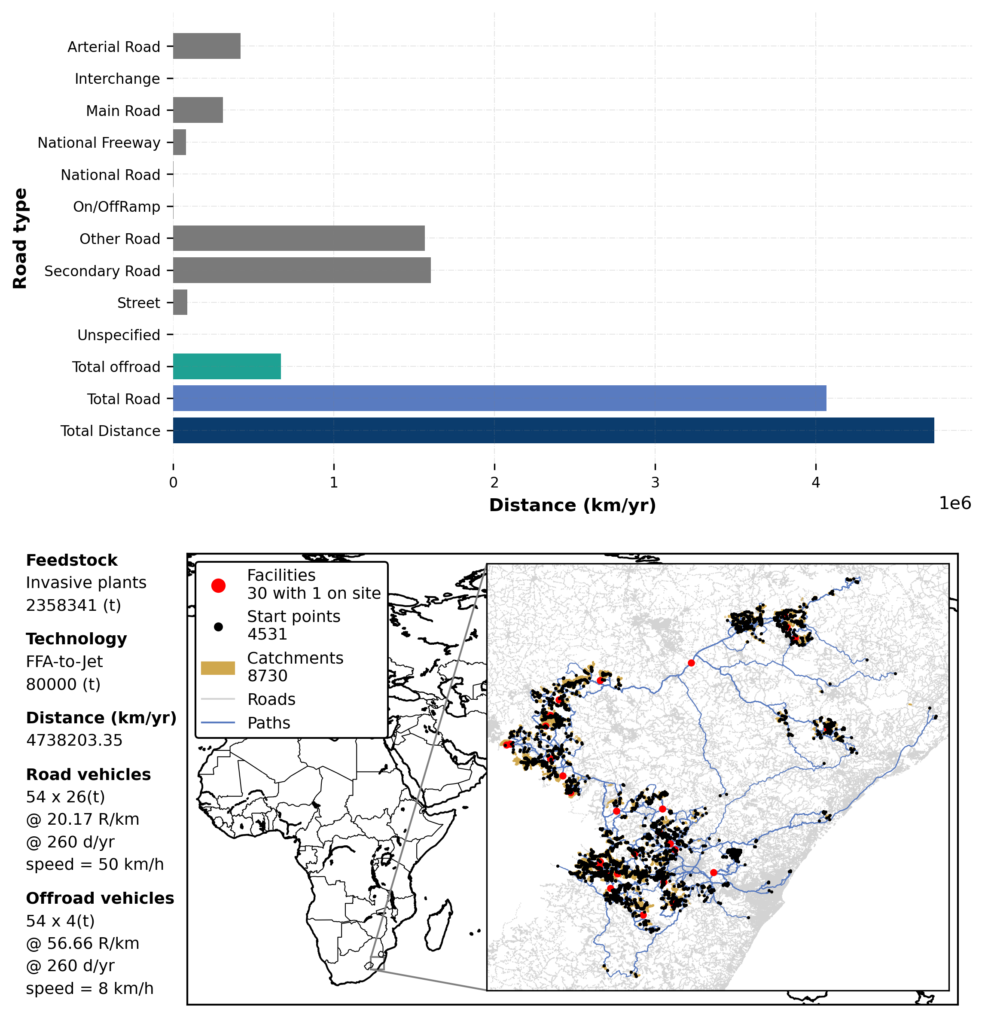 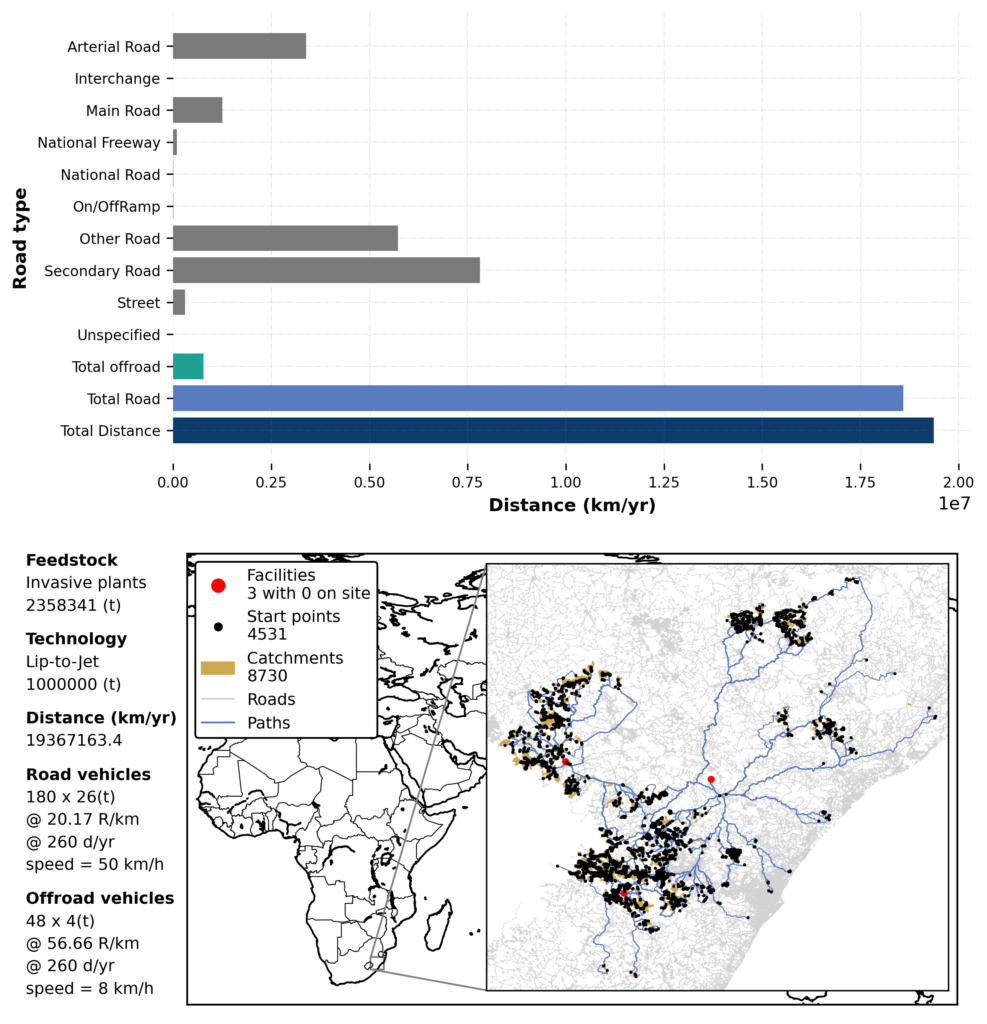 The spatial logistical modeling platform developed for the BioEnergy Atlas of South Africa was utilized to develop scenarios for locations where Jet fuel-producing facilities can be built. Model outputs include spatial logistical information such as optimal biomass transportation routes from the biomass location to the modelled facility locations as well as cost summaries which include Capex, Opex, and Transport costs. The modelled cost for each proposed facility location are compared to existing product market prices, allowing the price competitiveness for each location to be determined.

Model outputs show that the production cost (R /tonne) was above the competitor range for producing jet fuel from woody IAPs. Organic acid to Jet fuel was the technology with the cheapest production costs.